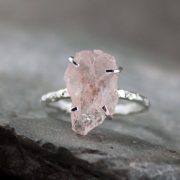 Morganite, also known as pink beryl, was first discovered in Southern California in the early 20th century. Morganite, which has a color scale from pink to peach tones, belongs to the beryl group like aquamarine and emerald.

At the time this beautiful stone was discovered, Tiffany & Co. By George Kunz, one of the stone experts working in his company, America’s banking giant and stone collector J.P. Morganite was named in Morgan’s honor. Morganite gets its pink color from the element manganese. Due to its color, it can be mixed with pink quartz and pink sapphire, but pink sapphire is very expensive and pink quartz remains more opaque than morganite.

White gold reflects its color better when used with white metals such as palladium and platinum. The most preferred color of Morganite is pink and light peach tones. It is a stone that represents especially Libra and people born in October.