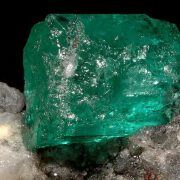 Beryl Stone is a precious mineral from the Beryl group family that can be found in different colors. It contains beryllium and aluminum minerals. It is a mineral that takes different names according to the color it shows. The transparent light blue colored one is aquamarine. The pink beryl is called morganite and the golden yellow one is called heliodor. It can also be found in dark green, green red, colors. The green one containing chromium is emerald.

It was widely used as a gemstone in the 1900s. However, later on, more important areas of use were discovered and its use increased in those areas. Beryl In the aircraft industry, beryl salts are used in fluorescent lamps, X-ray tubes and as ornamental stones.

The amount of beryl extracted from the mines has increased from year to year. Mainly Brazil, Zimbabwe, South Africa, South West Africa (Namibia), and the USA are the main countries producing beryl. In Turkey, beryl has been found in pegmatites in Söğütçük Village (Simav-Kütahya) and Kozluca Village (Gördes-Manisa) regions of İşercekaya Mevkii.

The chemical formula of Beryl, which is beryllium aluminum cyclosilicate, is Be3Al2(SiO3)6. Hexagonal Beryl crystals can range in size from very small crystals to meter-long crystals.

Beryl is usually found in vitreous luster, with a hardness of 7.5-8 and a density of 2.66-2.92. Beryl is known to heat up immediately when it touches the body.

Color: Colorless white or Green. It takes different names according to its other colors.