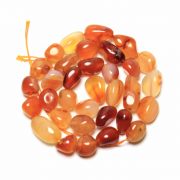 Agate is a very diverse stone found in many different colors in nature. The stones known as agate, also known as agate, are mixed colors of red, gray, white, blue, brown and green. Agate is known as ‘Yemen Stone’, ‘Immortal Stone’. Agate stone has been used as a protective factor against negative energies as ornaments, jewelery and decorative since ancient times. Agate is hard and its colored parts have a transparent or translucent structure. It got its name from the Achates River in Sicily.

Agate is a powerful healer in general. It can be used as a kind of therapy tool. Various minerals in the stone can be a source of healing in different aspects. However, it must be in contact with the body and the energy in nature, especially solar energy, must reach the body through the stone. Agate symbolizes Taurus.

• It is believed that it protects the carrier from danger and puts an end to their incompatibility.
• It is good for insomnia, cowardice, nightmare and evil eye, and it also helps the metabolism to work properly.
• It helps in realizing the facts.
• Agate, which has a strong and masculine energy, is beneficial for sexual organs and sexual power.
• It gives a feeling of warmth to the parts of the body that are in tension and reduces tension.
• It discharges excess or negative energy in the body and thus eliminates stress.
• It socializes the person and helps him or her to adapt to the environment and people.
• It helps to overcome fears and increase courage.
• Develops the power of reason and logic.
• Strengthens the body, relaxes the circulation of lymph.
• Balances blood pressure. In particular, it brings low blood pressure to its normal level.
• Provides protection against the evil eye. Because it is remarkable for the first glance.
• With its invigorating energy, it allows you to see the good side of things when you feel distressed and bad. If you’re easily effected by the negativity of people, carnelian will be very good for you.
• After canceling the tender and they will not offer users to see dr. Children who carry this stone in their pockets keep them away from negative emotions and arguments.
• Symbolizing worldly success, agate protects against negative energy and revives exhausted courage. It will be beneficial for businessmen to carry this stone, especially below the waist (pocket, ring, etc.). Especially when used as a ring, it increases one’s self-confidence.
• It represents joy and peace.