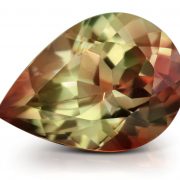 The trend of recent years, Zultanit (Zultanite), continues its rapid rise. So what makes it so valuable?

Zultanite, which started to be known and known in the world a little while ago after the 80s, is a natural stone that has been very popular for the last 10 years, is only mined around Muğla-Milas in our country and can be used in its hundred percent natural raw form. In addition, Zultanite® is one of the 5 stones that can change color in nature. This is why it is so popular and valuable. Zultanite stone has a hardness of 6.5 to 7 according to the Mohs hardness scale. However, after it is removed, it is gently removed with the help of a chisel so that it can be used without processing. With its color changing according to the light, it is possible to see many colors, mostly pink, green and brown, in Zultanite® stone.

This precious stone, whose real name is “Diaspor” in the mining field and which is offered to the user with the Zultanite® brand today, was first mined in Muğla Milas in 2005. Diaspor was named “Zultanite”, inspired by the word “sultan”, by the mine owner Murat Akgün, and Zultanite® became a registered trademark in the course of time. Today, Zultanite is a very famous brand registered in the USA on behalf of Global Licansing N.V.

Zultanite®, which is only sourced in our country, is used in ornaments and jewelry. Alexandrite stone, which is similar to Zultanite® and changes color just like it, is also in the same group as zultanite, but Alexandrite is mainly mined in Russia. It is at least as valuable as Zultanite in Alexandrite, but it should still not be confused with Zultanite.

Being of rare beauty and being extracted from only one source, Zultanit’s value increases day by day. Zultanite®, which is suddenly a favorite of the jewelry and jewelery world, does not seem to lose value easily.

While it is pink, purple and brown in sunlight, it turns bright green in artificial white light such as fluorescent. However, there is no transition between only two colors like Alexandrite and other color-changing stones in the same group. Zultanite also undergoes many shades of green, such as khaki green, sage green, and also appears under different light sources as champagne pink, yellow, pale peach and red. The vivid green color of zultanite with yellow color appears in white light, and the champagne pink appears in yellow light such as daylight or candlelight.

Zultanite® stone has a cat’s eye feature as well as a color change. What is the cat eye feature? -The appearance of a single bright band of light on the stone along the surface. It occurs as a result of parallel light reflections.

Zultanite has been defined as a Type 2 transparent stone by the Gemstones Institute. This means that no particles can be seen at close range with the naked eye. A magnifying glass that magnifies 10 times is required to see the particles. This means that this stone is real, as the particles are formed naturally during the formation process of the crystals underground.
Zultanite is composed of the mineral ‘Diaspara’ but is not Diaspara. In some places, Diaspara is sold as Zultanite stone. For this reason, special attention should be paid when purchasing this stone. Diaspara, which was found in the Ural Mountains in Russia in the 1800s, is mostly mined from that region. The mineral deposit in Turkey is still the only zultanite deposit in the world.
This stone, which was mined individually by stone lovers and independent miners in the eighties, is now commercially mined. It is extracted with chisels and pickaxes from the Milas region of Muğla, located in Anatolia at an altitude of 4000 feet. Selimiye is the closest settlement to the world’s only Zultanite® (Diaspor) mineral deposit. This name was given by the mine owner, Murat Akgün, in honor of the 36 sultans who ruled the Ottoman Empire in Anatolia.

Since Zultanite® is just beginning to be known and used, there is not much information and experience about it. Some of the known benefits are as follows.

Zultanite is a stone that reveals the skills of the best cutting masters.