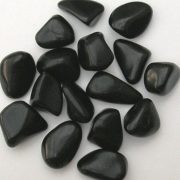 Oltu stone is an organic stone belonging to the Amber group, formed by the fossilization of plant remains. Because of this feature and its resemblance to Amber in terms of formation, it is also called Black Amber or Black Amber. Also known as Jet.

Oltu stone is called with this name because it is mined and processed in Oltu district of Erzurum in our country. It can be found in a mixture of yellow, brown, or rarely gray-green colors, especially black. However, the black one is preferred the most. The main countries mined outside of Turkey are India, Spain, France, the USA, Germany, Poland, Russia, England. Oltu stone is known as Black Amber and Jet here.

Oltu stone is a stone with a hardness of 3 according to the Mohs hardness scale, so it is easily processed and is therefore mostly used in jewelry and rosary making. Although it is easily processed, it is processed using special tools because it is a soft stone. It can be easily scratched as well as broken. For this reason, you should use and care for this precious stone with care.

Oltu Stone has been registered in our country according to Mining Law No. 3213 and has taken its place among semi-precious natural stones. Oltu stone is soft when underground but hardens when brought to the surface. It is a kind of lignite that ignites like kindling and leaves soot when burned, electrified by friction. Oltu stone is a fossilized stone in the form of petrified charcoal.

Oltu stone is found in the mine and in a brownish-black color when it is extracted, but after it is removed, as it comes into contact with the air, its brightness increases and turns into a darker black color. Although it is very rare, green oltu stone is also encountered.

The most common usage area of ​​this stone is Oltu stone rosaries. Oltu stone is used in various jewelry by being mounted with Gold and Silver. It has a shining feature when used. Oltu stone collects negative energy. Therefore, it is used as an amulet. In addition, oltu stone is a stone that you can use to collect the electricity of the body. Like Amber, it is one of the most comfortable stones to use as a rosary. It draws static electricity from the body and reduces stress. However, it should not be confused with Amber. (Amber is in the color of honey) The most important difference between Amber and Oltu stone; Amber is formed from the resin of the tree, while Oltu stone is formed by the fossilization of wood and resin.