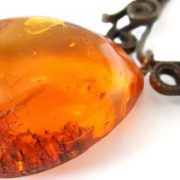 Amber, also known as Amber, is the fossilized resin of a pine species. It is a translucent and easily breakable fossil of various colors from light yellow to red, used in ornaments and jewelry making today. It is a stone that can attract small objects when buried somewhere.

The most extracted places are the Baltic Sea, Burma, Lebanon, Sicily, Mexico, Romania, Canada, Dominican Republic, Poland, Atlantic. Extracted from the Baltic Sea (Poland), Baltic amber has been adopted as one of the most favorite stones among women’s ornaments for centuries. It is not possible to compare it with any transparent stone in terms of brightness and color. Fossilized insects sticking to amber, the abundance of wild plants are important features not seen in other stones, and those with insect or plant fossils are considered more valuable.

Especially when amber is heated, its electrical and magnetic properties are revealed.
Amber, which used to have fame and many uses in medicine, is not used for this purpose today. In the past, purified amber oil has been used in hysteria and pertussis. It has also been used in the manufacture of fragrances and perfumes since ancient times.

Amber, which is widely used in Anatolia, is also used in ink production. It is also known as amber and is often used in jewelry making.
The most important feature of real amber is that it emits a pine scent when burned. It is made of imitation amber, plastic, glass, synthetic pine gum. It causes itching mixed with sweating on the part of the body touched.

Amber, that is, the amber acid in its content is of natural antibiotic value. For this reason, it has been used as a healing stone since the 2nd century. It is recommended to be used by everyone, especially to strengthen immunity.

Use of Amber in Babies

Recently, it has been used extensively in newborn babies. Amber shows significant benefits, especially during the teething period of babies. It is pain reliever and facilitates the teething process. It reduces saliva, calms down, strengthens the immune system. It allows the baby to sleep comfortably and therefore for a long time. It is useful in colic and gas problems as it regulates stomach and intestinal enzymes. It is supportive in the treatment of bronchitis and asthma.