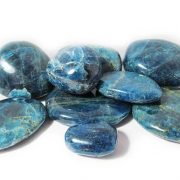 With its dazzling colors, Apatite is a gemstone often used in jewelry making. Apatite Stone, which inspires its designer, is available in many colors, especially Blue-Green tones. It can be found in green, grayish-green, dark blue, blue-green, brown, yellow, white, even purple, and magenta. The most common color is green Apatite, and the rarest color is yellow Apatite.

Apatite stone, which is mixed with many stones in terms of appearance, is mostly mixed with colored transparent stones such as Beryl, Quartz Crystal, Calcite, Amethyst, and Tourmaline due to its color and structure. However, there are many fakes on the market. One must be very careful in this regard.

Apatite Stone, whose word origin is Greek and whose meaning is “deceiving”, belongs to the Phosphates group. In addition, Apatite is divided into three mineral groups. These; fluoro-apatite, color apatite, hydroxyl-apatite. The most common is fluoride-apatite.

Apatite is a great source of phosphate. For this reason, it meets the phosphate needs of plants underground. Phosphate is also a mineral needed by humans and animals. Our bones and teeth are made of calcium phosphate.

The main countries of origin are; Brazil, Tunisia, Egypt, Hungary, Israel, USA, Russia, Germany, Austria, Portugal. Apatite is often found in volcanic rocks. This mineral-rich stone can be found in a variety of forms. Like a crystalline or amorphous piece of rock. While you can be transparent, there are also semi-transparent and opaque types. In addition to its use as jewelry and ornaments, it is also used in industry. Since the hardness is moderate, it should be handled with care.

Apatite is one of the stones used for meditation, which strengthens psychic abilities. It increases communication power, self-expression ability, and self-confidence. One of the physical effects of apatite stone is the suppression of hunger. For this reason, we can call it a kind of diet stone. It will be useful for people who want to lose weight, especially to carry them.