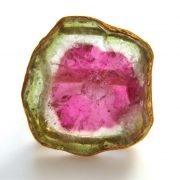 Tourmaline, the most colorful of the natural stones, also known as rainbow stones, is usually found in a color scale ranging from pink to green, but it can also have various colors. Tourmaline can be found in almost every color in nature. Some of the known colors of this precious stone are as follows; Red: rubellite (rubellite), Blue: indicolite, Green: chromolite, Yellow: Canary, Green, and Blue: Paraiba.

According to an ancient Egyptian belief, the tourmaline stone passed through the rainbow on its way to the earth. For this reason, they believe that the rainbow contains all its colors.

The name Rainbow also comes from this legend. Tourmaline stone, which has more than one color, is called a cat’s eye, and the one that turns from green to red in the light is called a color changer.

Since it is a balancing stone, it represents especially Libra. It is one of the stones that is especially suitable for married people. It is appropriate for couples to give each other as gifts in the 8th and 38th years of marriage.

Tourmaline stone is compatible with Root, Heart, Throat chakras. Its hardness is between 7-7.5 according to the Mohs hardness scale. Although it is a suitable stone for use in jewelry, each of the jewelry made using tourmaline is different from each other. This is one of the prominent features of tourmaline. One stone does not have exactly the same tone as the other. For this reason, it has been believed throughout history that Tourmaline is magical and protects those who wear it from bad influences. Tourmaline stone is mined in Afghanistan, Brazil, America, Italy, Russia, Tanzania, Madagascar, in our country: Yozgat-Sarıkaya, Aydın-Çine, Çanakkale and the Black Sea Region.

Tourmaline, which does not have any negative effects, is recommended not to be used by people who are only trying to gain weight and have weakness problems. Tourmaline should be used with silver or gold-mounted jewelry, but it should definitely touch your skin.