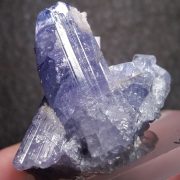 Tanzanite is a rare gem…

Tanzanite, named after the state of Tanzania, was introduced to the world by the New York jewelry company Tiffany&Co. Although this name has gained a place in the commercial sense, scientists consider this stone as blue zoisite because they do not approve of giving more than one name to a stone. However, it is thanks to Tiffany&Co that tanzanite gained its present value. The best quality ones are in sapphire color. However, Tanzanite has a color scale from blue to purple. Tanzanite acquires a purple ruby ​​color in artificial light, however, with the application of heat of 400-500 °C, its yellow and brown colors disappear, and its blue color becomes more pronounced.

Tanzanite is a very unusual and precious stone. As we mentioned before, it is only mined in Tanzania in the world. One of the most distinctive features of this stone is the pink light surrounding its Blue color, which only appears when it shines. Especially in stones of 10 carat and above, the pink light is quite strong.

Millions of years ago; It was formed among volcanic rocks formed with enormous pressure and heat in the old world where tectonic activity was experienced. Tanzanite completed its formation process with the highest point of Africa, Mount Kilimanjaro. However, this 600 million-year-old rare stone was not discovered until 1967. First, a shepherd from the Masai tribe found this blue crystal on the outskirts of Kilimanjaro.

Tanzanite is the blue member of the zoisite group. It is composed of calcium aluminum silicate combination and its hardness is 6.5 on the Mohs scale. This means that tanzanite, which is generally used in jewelry, is not very hard and care should be taken during use.

Places of Extraction: At the foot of Mount Kilimanjaro, Tanzania