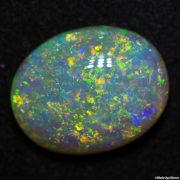 Opal, which belongs to the silica group, is a variety of quartz. It is formed as a result of the movement of underground waters and its precipitation in the spaces between the rocks. It covers all hydrated and gelatinous varieties of silica. For this reason, its appearance is oily and glassy.

Opal has many varieties, but the most famous is noble opal. It is very valuable as it creates iridescent sparkles and is used in jewelry making. The best quality of Opal is mined in Mexico. There are many varieties such as flaming opal, scaly opal, oriental opal. The type found in Mexico is commercially known as fire opal, honey opal, flame opal; This opal, which is red, orange, and sometimes Greenish yellow, shimmers in fiery red tones.

It has the ability to change color according to body temperature. Opal stone is called antidote stone, rainbow stone among the people. It is believed to be one of the healing stones.