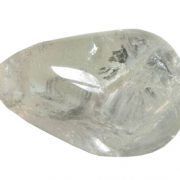 Najaf, also known as Mountain Crystal, is a transparent type of crystal quartz stone from the Quartz group. It is a glassy shiny stone. It may be colorless or a mixture of different colors. The Najaf stone has a rippling appearance. The main reason for this is the presence of bubble-like spaces in it. These spaces are filled with water or carbon dioxide. The biggest difference between Crystal Quartz and Najaf is the bubbles inside. Crystal Quartz has the appearance of flat glass. Although in many sources the two are mentioned as the same stone, this is the main difference between them.

Najaf is known as the eternal luck stone. At the same time, Najaf traps all kinds of negative energies and protects the body and mind. Najaf stone, called mountain crystal, gives relief and peace to the person who uses it due to the formation conditions and the water it contains.

The Najaf stone got its name from the city of Najaf in Iraq, where it was first discovered. It is said that the liquid contained in the hailstones raining on the city of Najaf is formed by the flow of the liquid from the grooves of the mountain to the mountain and hardening and freezing there. For this reason, Najaf is also called the “miraculous stone”. On the other hand, Najaf stone is mined in various countries of the world, including Turkey. The main countries are; Madagascar, Russia, Brazil, and the USA. In Turkey, it is mined in Beypazarı, Kars-Kağızman, Aydın-Çine-Ovacık mountain villages. Necef stone, discovered centuries ago, is used in places as an ornamental stone or in jewelry and jewelry making.

When the Necef Stone has so many benefits, long-term use causes too much negative energy to be loaded. For this reason, the stone must be cleaned and ground at certain intervals so that the accumulated negative energy is not transferred back to the user.

Chakras: Top and All Chakras