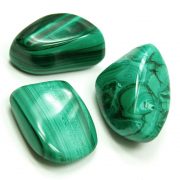 Malachite is a generally bright green mineral composed of copper carbonate. It is abundant copper ore in nature. Malachite is found after oxidation with copper sulfides, especially chalcopyrite, and in the upper parts of their deposits. As a result of this oxidation, it occurs when water, air, and carbon dioxide affect copper sulfide in places where calcium carbonate is present.

Malachite is usually found on the green with streaks of darker green. Since malachite is not very hard, it is shaved and polished and used in jewelry and mother-of-pearl. Although rare, malachite can also be found in crystal form. Its crystals, which form like needles and bristles, are bundle-like together. It is mostly found on the upper surface as tuberous, rounded, clustered. Its crystals are blackish green and glassy lustrous.

Real Malachite is easily broken, the fracture surface is mussel shell-shaped. If heated, it releases water and turns black. It is soluble in ammonia and foamingly soluble in acids. It is found in various places in Siberia, Hungary, Cornwall, Germany, North and South America, Southern Australia, South West Africa, and Anatolia.

Malachite is a stone of joy. It calms the person using it and is known to be good for those suffering from insomnia. It helps in reducing pain and grief. It strengthens the circulatory system and the heart.