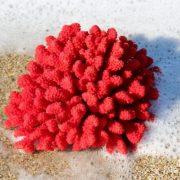 It is a living organic stone like coral, pearl and mother-of-pearl. Coral is a stone that can be found in every shade from white to red, pink and orange. Although rare, it can be blue in color. It is an opaque and matte stone. It is a living stone that forms and lives in all warm and shallow seas around the world. Corals are composed of pure calcium. Compatible with Pisces, Aries and Libra. However, the red coral represents the Scorpio sign. Coral is one of the very few objects mentioned in the Qur’an. In the time of Rahman, it is also mentioned together with the pearl and it is stated that it is one of the most important blessings of Allah (c.c.).

It is widely believed that it strengthens the heart and spleen, gives relief, peace and energy, strengthens respiration, prevents low blood pressure, balances the body, heals the lungs, and symbolizes deep love and affection. Coral, which has been used as jewelry and ornaments from past to present, may contain pure calcium as well as magnesium carbonate and trace amounts of some organic substances in its chemical composition. It shines like glass when polished. In jewelry manufacturing, red, pink and white corals are the most popular. Among them, the most valuable is red coral. Coral, which is sensitive to acids and heat, can discolor you during use. The places where the coral stone is extracted the most are the coasts of Africa, Australia, the West Indies, Malaysia, Italy, Algeria, Sicily, Spain, the coasts of Japan and the Pacific Ocean coasts.

It has the appearance and hardness of natural coral, grain or wood. The first distinguishing feature of natural coral is its color and rough and stained surface. Smooth corals are either corrected by processing or artificial, that is, fake. The ones with an overly pronounced color are dyed, and the ones with no stains are most likely fake.

It is more beneficial when used with silver or copper in coral jewelry. It is used for the treatment of many skin diseases, especially psoriasis.

Color: All shades of pink and orange, from white to red, opaque, matte