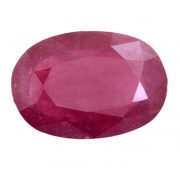 Ruby, one of the most valuable stones in terms of beauty and aesthetics, is known as the lord of stones in India. It is the most valuable and hardest stone after diamond. The hardness of the ruby ​​is 9.0, the melting point is 2050 °C. It has a range of colors ranging from red to brown or pink to magenta, in various shades of red. It is the chromium element that gives the ruby ​​its red color.

Ruby was used in making the first laser. Contrary to popular belief, laser making with ruby ​​has not been easy. The main reason for the difficulty is that the ruby ​​has three energy levels.

It is an unpretentious stone in its natural state, but when cut it can be as eye-catching as a diamond.

Ruby gives people a sense of freedom and a revival effect. It provides the expression of emotions such as courage, leadership, happiness. Ruby stone stimulates blood circulation in a positive way. It gives the wearer a sense of courage and self-confidence.

The red color reflects the energy in it to the person carrying it.

Ruby is used as precious stones in jewelry such as rings, necklaces, bracelets, and chokers. It takes its place among the most valued stones by jewelry lovers. It reflects a wonderful range of colors with shades of red. It is known that it increases the body resistance with the energy given by the red color and strengthens the immune system. Ruby stone is one of the most loved and preferred stones among the healing stones.