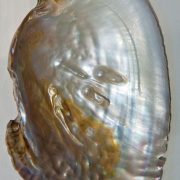 The mother of pearl is a stone of organic origin. It is found in the shell of sea creatures such as mussels, oysters, and snails. There is a lot of aragonite in the interior of these shells. It has iridescent, shimmering colors like a rainbow.

As you know, Pearl also grows in oysters and it is also an organic stone. For this reason, another name of the mother-of-pearl stone is Mother of Pearl. It covers the inside of the shell in which the pearl grows and acts as a mother to it.

The mother-of-pearl stone has a hardness of 3-4 according to the Mohs hardness scale. It is used in making jewelry, rosaries, and ornaments. Mother of pearl, which is among the most preferred precious stones in our country, is also widely used in ornaments such as chests and coffee tables. It is a delicate stone as it is not very hard. It is also a fine, brittle stone.

Places of Extraction: It is extracted in all countries with a coast to the sea or the ocean.