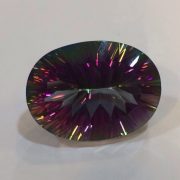 Topaz, which is transparent or semi-transparent in nature, can have many colors such as blue, pink, yellow. The most common is blue topaz. The most eye-catching is the mystical topaz, which has a rainbow color. Mystical Topaz is also called Fire Topaz, Rainbow Topaz (Rainbow Topaz), Alaskan Topaz.

Topaz, which has been used since ancient times, is one of the effective stones. It is known to have a healing effect as well as a spiritual sense.

Mystical topaz is generally used in jewelry making because of its eye-catching colors. In order for the mystic topaz to fully benefit, the jewelry used must be in contact with the skin.