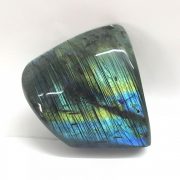 This dazzlingly beautiful stone, named Labradorite due to its extraction from the Labrador coast in Canada, is formed in igneous rocks. It was first encountered in 1770. It was found on the island of Labrador by the Czech missionary Pater ADOLF. It was found in the Thrace region in our country in 1970.

It is from Calcium, Sodium, and Aluminum Silicates. Its hardness is between 6-6.5. It occurs with the phenocrysts of the primary minerals that crystallized in the triclinic system, causing rock formation, and the mineralization of basic pegmatites. It is operated in mineral deposits in Canada, Madagascar, Finland, Norway, Russia, India, and Central America. It contains many colors from black to red, orange to green.

The beautiful energy of Labradorite crystal gives you happiness and affects you positively. You can activate and strengthen your 3rd eye with introversion exercises with Labradorite. In some countries, the term “Temple of the Stars” is used for Labradorite. The reason for this is that it is believed that by opening one’s clairvoyance, one can get broad visions, make astral travels, that is, transition to different layers of existence.