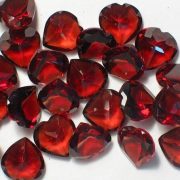 Garnet can be found in a wide variety of colors, transparent or opaque, that is, semi-transparent. Garnet, which is generally known in red color and is also called “garnet stone”, is a circular or oval-shaped stone, also known as “Imagination” or “Compassion Stone”.

The male type of Lal is dark red and the female type is light red. Garnet is not included in any mineral group. The chemical compositions and colors of the stones in the garnet group are different from each other. For this reason, it is classified as a standalone stone. It can vary in color from deep red to orange and sometimes purple to lilac.

Garnet is one of the natural stones that help people take all their negative energies and turn them into positive ones. Heart-shaped garnets represent lovers and spouses. Garnet is actually referred to by 3 names. It is known as garnet, garnet, and garnet.

Garnet, which is one of the precious stones, can be used in necklaces, rosaries, earrings, bracelets. Garnet helps relieve stress and fatigue in our daily lives.