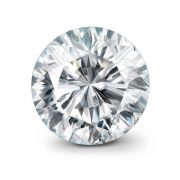 Diamond, that is, a Diamond in its rough form, was originally found only in kimberlite rocks. Diamonds found in other rocks were formed largely by erosion from kimberlite or by metamorphism of sediments. South Africa (in Kimberley), South America, Indonesia, and India can be shown as the places where the Diamond is most abundant.

The “arch” section can be natural, polished, or faceted. Belt thickness affects the brilliance of the Diamond. A Diamond with a thick belt looks more matte, while a Diamond with a thin belt is not resistant to the setting. The belt is an important part that keeps the Diamond intact. Without the belt, the Diamond could not be used in production.

The section under the arch is called the “cone”. There are 24 facets in the cone. The cone allows the light entering the Diamond to reflect out. If the cone is cut at the right angle, the light that enters the Diamond is reflected and comes out of the crown. Thus, optimum brightness is provided in the Diamond. Sometimes a facet can be applied to the tip of the cone. With this facet, damage to the tip of the cone, which is the most sensitive part of the Diamond, is prevented. Although it is the hardest mineral in the world, a Diamond is vulnerable to impacts from certain directions and can break quickly. 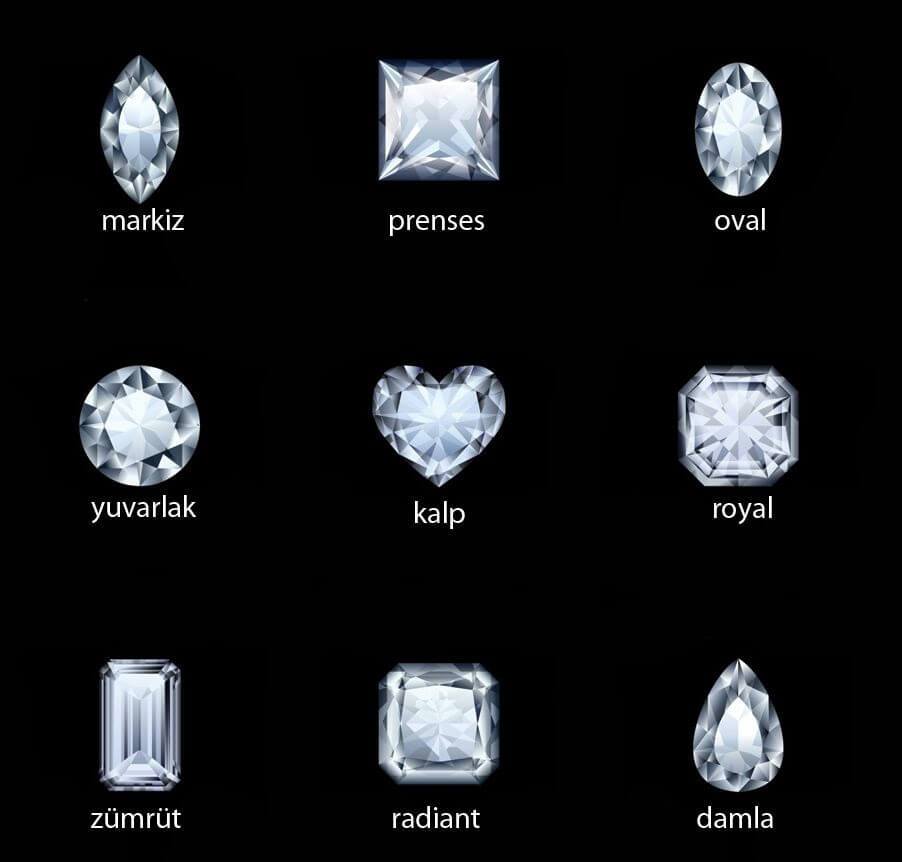 How should an ideal diamond be?

The value of a Diamond is determined by its 4C (Cut – Carat – Color – Clarity) properties. The 4C features are the 4 features called cut, color, clarity and carat weight used when classifying the Diamond. When purchasing a Diamond, you should definitely consider these features. The brightness and beauty of the Diamond depend on these 4 criteria. As long as the Diamond is not damaged as a result of an accident, it loses nothing of its 4C value. 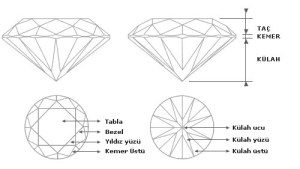 Carat is related to the weight of the Diamond. Carat is one-fifth of a gram (1ct = 0,200 gr). Although weight is an important factor in determining the value of a Diamond, it is not enough on its own. There are differences in the values ​​of two diamonds of the same weight due to differences in colour, cut or clarity.

Due to the reactions that the Diamond undergoes during its formation, it can be found in different colors. It has a color scale from dark yellow to vivid, bright white. The closer the diamonds are to colorless, the more valuable they are. The rarest and whitest ones are D, E, F, G. Most of the diamonds in nature are among the H-L colors. In the M color and below, the yellow hues progress from light to dark. There are also diamonds in very rare colors. These are rare stones with distinctive colors such as pink, blue, yellow and red.

Clarity characteristics make each Diamond completely different from the others. No two diamonds will have exactly the same inclusion in the same place. Large Diamond grading such as GIA, HRD There are five factors used to determine the clarity of any Diamond.

1. Size
2. The number of inclusions (spots or marks in the Diamond)
3. Position
4. Natural Feature
5. Embossing