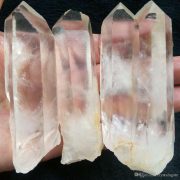 Crystal Quartz stone, whose real name is Quartz Crystal, is spread over a wide area around the world. It is a hard and solid mineral group that makes up more than 10% of the earth’s crust. They are crystals in the form of hexagonal prisms. Often there is a frozen drop of water inside and when it breaks it turns back into the water.

Quartz crystal, which has been used in the fields of magic and treatment since ancient times, consists of components of oxygen and silicon. Today, it is one of the leading stones of therapeutic quality. In fact, the term crystal quartz describes a very large family of stones, not a single type of stone. Some of the members of this family became known by their own names by declaring their independence. Stones such as Amethyst, Citrine, Bloodstone, Chrysoprase are from this family.

It is used in the industrial area as an electronic transmitter and separator, but also in watches, detergents, dental
It is used in pastes, glass, and electric lighting. In a metaphysical sense, it is a symbol of strength and hidden power. It transmits the energy of nature through it. It is believed that it represents the infinite power of the universe and that the bearer can grasp this power. In ancient times, quartz crystals were used with prayers for rain.

It destroys the negative energy around the person, collects the positive energy, activates it, and accumulates it. It also has a feature that activates thought-forms.

Countries of Origin: It is a hard and solid mineral group that makes up more than 10% of the earth’s crust. It is widely available.