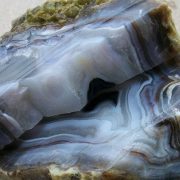 The chalcedony stone, which belongs to the quartz group, has a waxy shine, is semi-opaque and mostly in blue-white colors, can also be found in yellow, brown, gray, yellow, green colors. Chalcedony, whose history dates back to the Hittites, is mostly mined in Anatolia.

Chalcedony, which was shipped from Kadıköy port of Istanbul during the Roman period, takes its name from the name of the port at that time (Chalcedon, that is, Kalkedon). This is why chalcedony is also known as the Kadıköy stone. Although it lost its importance for a long time after the end of the Roman period, its star shone again in the 1970s.

Seeing the value of Anatolia’s “blue gold”, Chalcedony nourishes the Spirit and strengthens faith. It has been seen as a symbol of success and power. It is known to be good for sleep problems and is believed to protect the user against evil.

Today, chalcedony, which is used in ornaments, carving, and jewelry making, is mined in Eskişehir in Anatolia. World-famous blue, purple, and pink chalcedony are mined here. They get different names according to different colors and patterns; such as agate, onyx, jasper, and chrysoprase. It is also mined in Germany and Mexico.

Chalcedony is used for the throat, solar plexus, and root chakras.