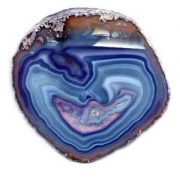 Blue Agate is the most popular and preferred semi-precious stone among agate stone types. It has a color scale ranging from shades of blue to shades of gray. Blue Agate is translucent or opaque. However, it usually has gray lines on it.

You can use it as jewelry to take advantage of the benefits of this precious stone. If used in this way, it is important that the stone touches the skin. Suitable for rings, necklaces, bracelets. It is generally used in making rosaries. You can also use a natural piece of blue agate stone in your home or workplace as a decorative.